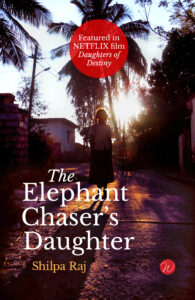 When you are a female born into a poor Indian family, the odds are already stacked greatly against you.

The human drama captured in this memoir is nothing short of amazing – a young woman’s struggle between the two worlds of her existence. Saved by her grandmother from being killed at birth for being a female and abandoned by her mother at a young age, Shilpa faces the formidable constraints placed on her by her family and the village elders.

The values with which she is being brought up in a school for poor children started by a philanthropist come in conflict with those of her family, tearing each other apart. Just when all seems settled, an unforeseen death under mysterious circumstances shatters whatever stability remains in her life.

Pulled in opposite directions, and torn between despair and dreams, Shilpa finally makes a choice for her escape. But is she strong enough to stand up to the people she loves, and pursue what she wants?

At its heart The Elephant Chaser’s Daughter is about hope, when all seems lost. Written with raw honesty and grit, this is a deeply moving memoir of a young woman confronting her ‘untouchable’ status in a caste-based society, and her aspirations for a purposeful future.